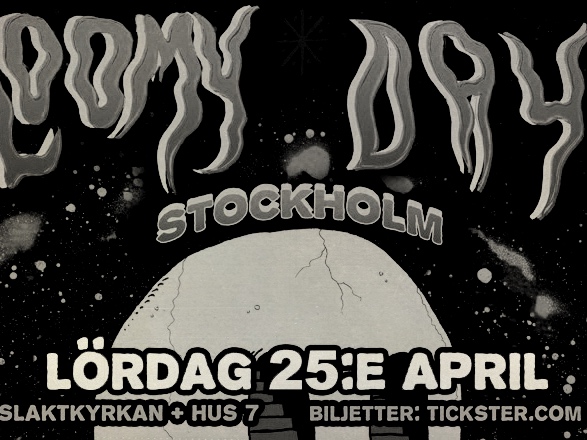 OBS: Flyttas till senare i år!

One of most talked-about names from the swedish underground are finally making their way to Stockholm once again.
Classic d-beat combined with the dark sound and vibes of the infamous Gothenburg sound. Disfear are back!
We are extremely proud to be able to present this exclusive show at Gloomy Days Stockholm.

The phoenix will rise once again in a new shape and form. This time as a multi-headed beast. Switchblade will return to the stage with new material, new members and with rejuvenated heaviness and intensity.

The mythical and atmospheric Jarboe returns to Stockholm for an exclusive performance. The solo artist who previously sang and stood for keyboards in the aforementioned Swans, is now creating a musical landscape that offers a journey through emotion, darkness and dystopia.
We are extremely proud to be able to offer Jarboe live at Gloomy Days Stockholm.

The ultimate heaviness named Ocean Chief has delivered some of the most talked about releases with a heaviness that makes the earth rumble. This is a pure masterpiece of a band and to have them at the Stockholm edition of the fest is something that we have aimed for since day one.

UKs Ungraven delivers foul and orc-ish Norwegian black metal spite to the majestic rusted frame of nineties Midlands post-hardcore industrial brutality. With John Davis (Conan) behind the riffs this duo brings out the filthy and darkest side of sludge. The sounds of Celtic Frost, Nailbomb and Godflesh all together under the name of Ungraven.

Since 2007 our lads in Spelljammer have been delivering some of the most interesting and unique sounds in Stockholm. Psychedelic and groovy music that brings both the old 70`s in mind but in a modern and heavy blend. In 2015 the band released a cornerstone in the swedish stoner/doom scene with their magical release ”Ancient of Days” and we are very pleased to be able to have them as our guests at the fest.

This outfit have been on everyones radar lately due to their magnificent brand new release ”Blood And Wine”. With a new vocalist the band are aiming for the world and there will be no necks safe after their have explored the heavy side of Goatess.

The sludge monster from Sheffield are finally appearing on a stage in Sweden. With a soundscape and atmosphere very few bands can reach, Kurokuma delivers some of the heaviest and toughest tracks in todays alternative music scene.
A must-see for all the visitors to the fest!

The beast of noise from Croatia are making their debut in Stockholm at the fest. After their appearance at the Gloomy Days Festival i Linköping in September 2019 the band became one of the most talked about names from that line-up. Now we will unleash their fury on the big city and wait for the damnation. Negative Slug defines the perfect mix between sludge and d-beat. Truly a masterpiece!

Linköpings Siberian have been compared both to Mastodon and Unsane but still with their own unique sound and style.
After two albums the band are establishing themselves as one of the most interesting new acts in the genre.

A new name on the noise/sludge-scene but still as loud as the leaders. This duo brings some of the most intense and chaotic sounds to the fest and is a perfect opinion for Gloomy Days Stockholm. Be there in time cuz this is something we will be hearing more from in the future!

One of our favorite designers here in Sweden is named Christopher Cretan Ekendahl. He have done several great design for us and now we can proudly present an exclusive art-exhibition at this years Gloomy Days Stockholm. We strongly recommend a visit to his showroom at the festival. Behold beautiful art and get inspired!