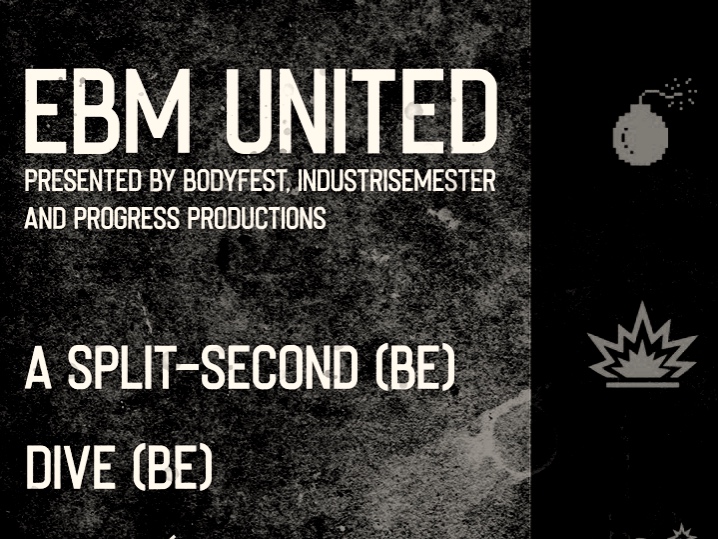 Hallelujah! Praise Buddha, Shiva and Osiris – A Split Second are back again after they conquered Bodyfest in 2014. Old men, sure, but these guys are a fantastic live band and always deliver a suberb experience for mind, soul and BODY. A hard-hitting and energetic show combined with tons of great hit songs is what we can promise to those who didn’t see the show in 2014. Be sure not to miss “Flesh”, “Mambo Witch”, “On Command”, “Rigor Mortis” together with hypnotic live versions of “The Colloseum Crash” and “Colonial Discharge”. This will be a gig to remember….again.

DIVE (BE)
Ever since The Klinik went in hiatus, in late 2014, Dive has been the main focus of Dirk Ivens. Dive started out in 1990 and with minimum equipment this one man project creates maximum power. From the self-titled debut in 1990 to the latest album “Underneath” in 2017 we have been served a meal with primitive, harsh industrial music. Be prepared for a mindblowing and epileptical gig with an exceptional front figure who since a very long time is a legend in the EBM scene.

POUPPÉE FABRIKK (SE)
Swedish EBM-giants with new material to be released next year. Some new songs where aired at this summer’s Industrisemester and of course we would welcome them back for a full demonstration of the new material. Psychical EBM at it’s best and we encourage a mosh pit worthy of the old days. Pouppée Fabrikk where alongside Cat Rapes Dog, the flagships of Swedish EBM in the late 80’s and the beginning of the 90’s and ever since the release of “The Dirt” in 2013 we have longed to hear some new music. We have heard a lot of the new stuff and be sure mayhem is coming your way. Expect a show with severed limbs and broken bones as a probable outcome.

SPETSNAZ (SE)
Last we heard of Spetsnaz was a cancelled show with Subkultfestivalen this summer. Eager to hear these masters of Old School EBM we will of course serve you with a most awaited re-appearance in Stockholm. Last time in the capital was Bodyfest 2012 and that is way too long for a band with endless hit songs, great sense of humour and crowd-pleasing performances. True Swedish old school gnäll EBM is coming your way.

LUCIFER’S AID (SE)
Ever productive hardware specialist Carl Nilsson has really made a name for himself during the last couple of years. With an album per year since 2016 we are of course expecting another one coming late 2019 and the success is not likely to slow down. Carl breathes and dream of EBM 242 hours a day and the next album, after that, is surely already on the drawing board. Harsch and evil industrial EBM that is becoming a regular element among European festivals.Nuclear Sludge

Nuclear Sludge is the pseudonym of the Stockholm based producer Jimmy Svensson. Sprouted from a world of punk and industrial music with a DIY aesthetic. A transformation from bass player in punk bands into an industrial machinist. Harsh vocals on top of forceful bass lines and intense rhythmic madness lay the groundwork for his industrial fused electronic body music.
Also known for his aggressive and vivid live performances as Yabibo Hazurfa and as a member of Alvar and Æmit. Straight out of Stockholms DIY underground.

Kinder Aus Asbest
Stockholm based Kinder aus Asbest has sporadically appeared on small edition DIY releases, cassettes and vinyls on labels such as Exil-System, Dödsdans, Lux Rec and Electronic Emergencies. Strongly influenced by lesser known synth bands from the 80s he produces a minimal and cold synthpop that sometimes take a darker turn towards EBM and minimalistic experimental electronics. His live gigs are rare, only a handful the past two decades, and most of them abroad. For EBM-United he will perform a new live set with harder beats and juicier basslines than ever before. Minimal, monoton with banging thunder from the darker side.

Severe Illusion
From Sweden’s beautiful capital comes Severe Illusion, a band that has been with us for a very long time. Almost two decades ago, the band’s first true full-length album ”Discipline is Reward Enough” was released, and everything after that is, as they say, history. After countless albums, and sometimes intense touring, they will be back with newly released material and with the same attitude problem as before. When the band is on stage at HUS 7; it will get chaotic, it will get dirty, and there’s nowhere to escape.

Alvar
The devastatingly saturated 4-piece machine Alvar will soon need no presentation. They have never done the same gig twice. They have released music at companies such as Beläten, Daft and Cloister Recordings.
Now heavier, colder and sharper Alvar picks up their collection of scrap and noise and offers intensive ebm, broken techno, pounding industry and some bitter tears thrown in your face.