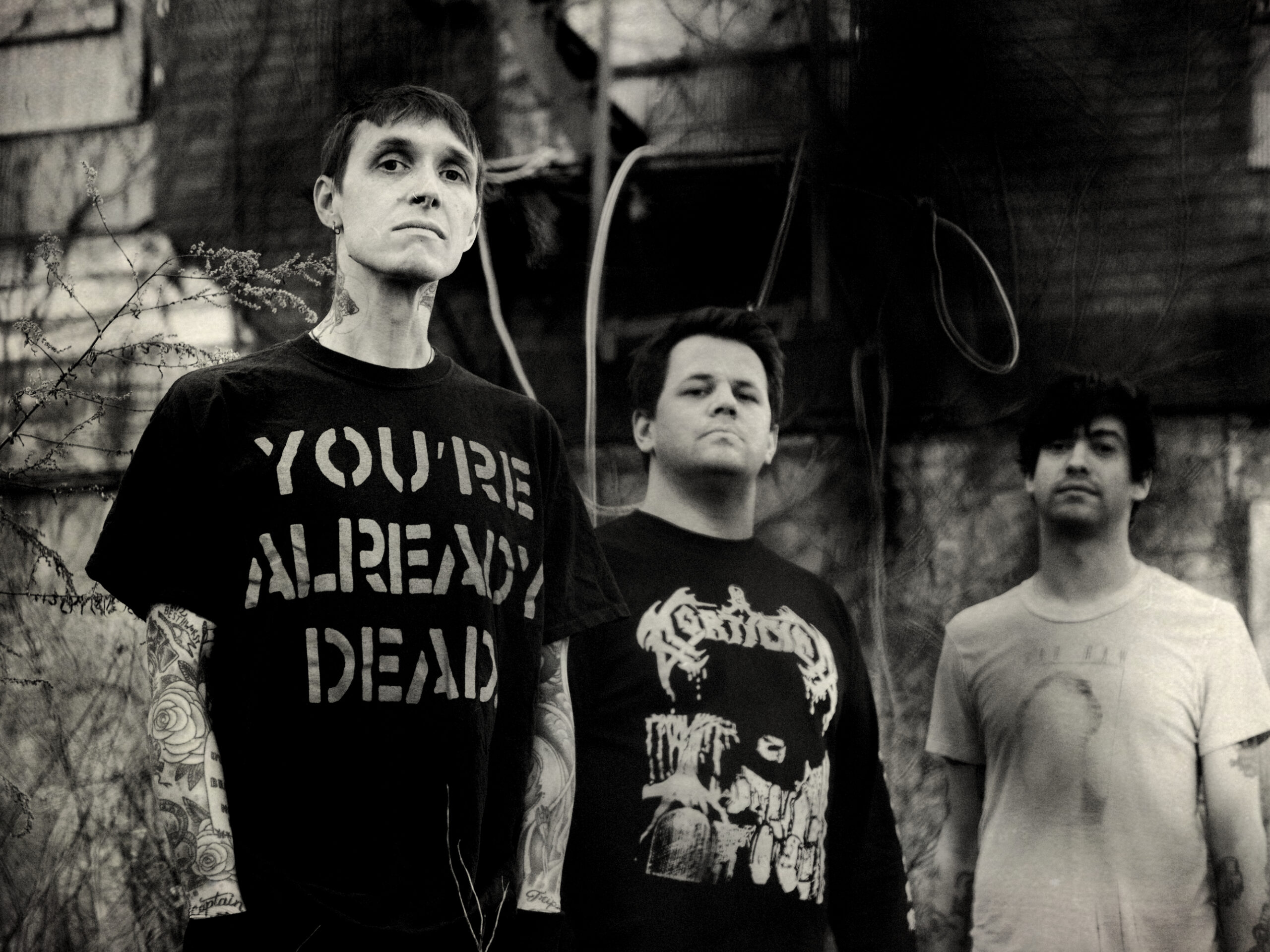 What if the antihero in your favorite film or book had no chance to repent, reconcile, or redeem himself? There’s no victim to rescue. There’s no evil to thwart. There’s no tyranny to turnover. Instead of saving the day against his better judgment, he just walks a Sisyphean circle of existential malaise doomed to repeat yesterday’s vices without the promise of a better tomorrow. Rather than tell this story on the screen or on the page, Uniform tell it on their fourth full-length album, Shame. The trio – Michael Berdan (vocals), Ben Greenberg (guitar, production), and Mike Sharp (drums) – strain struggle through an industrialized mill of grating guitars, warped electronics, war-torn percussion, and demonically catchy vocalizations.

“Thematically, the album is like a classic hard-boiled paperback novel without a case,” says Berdan. “It focuses on the static state of an antihero as he mulls over his life in the interim between major events, just existing in the world. At the time we were making the record, I was reading books by Raymond Chandler, James Ellroy, and Dashiell Hammet and strangely found myself identifying with the internal dialogues of characters like Sam Spade and Philip Marlowe.”

The lead-up to this moment proved just as intriguing as any of those characters’ exploits. Born in 2013, Uniform bulldozed a path to the forefront of underground music. Following Perfect World (2015) and Wake in Fright (2017), the group’s third offering, The Long Walk (2018), represented a critical high watermark. Pitchfork christened it “their most unified—and most deranged—record to date,” and The Line of Best Fitcrowned them “vanguards within the genre.” In addition to touring with the likes of Deafheaven and Boris, they joined forces with The Body for a pair of collaborative albums – Mental Wounds Not Healing (2018) and Everything That Dies Someday Comes Back (2019) – as well as the live release, Live at the End of the World (2020). When it came time to pen Shame, Berdan made a conscious decision to include lyrics, marking a first.

“I wanted my words to carry a degree of weight on this record,” he says. “Books and cinema have always been integral to my life, and that is often because of how I relate to the themes and characters therein. I am naturally shy and terrified of being misunderstood. This time around, I endeavored to trudge through those fears in order to explicitly articulate what goes on in a dreary corner of my inner life. To put it plainly: I was in a dark place. It was the culmination of years of thinking everyone in the world was wrong, but me. I realized that I couldn’t control the attitudes and behaviors of other people, but it was my responsibility to look inward and fix what was there. I had to articulate what was going on in my heart, my head, and my soul. As I set about the task of writing everything down, I experienced exorcism. If I wanted any kind of reprieve, I had to let go of the narrative that the demons in the back of my head had been constantly whispering to me. For years I held onto my lyrics like personal diary entries. Now is the time for a different approach.”

This record marks the debut of Mike Sharp on drums, adding a natural fire to the engine. His presence grinds down their metallic industrial edge with a live percussive maelstrom. Once again, Greenberg assumed production duties behind the board at Strange Weather. Building on the approach from their last LP, the band perfected the powerful hybrid of digital and analog, electronic and acoustic, synthetic and actual that has become their hallmark. In another first, Mixing duties were not handled by Greenberg, but rather handed off to the inimitable Randall Dunn at his studio Circular Ruin. Of this decision Greenberg says, “On ‘The Long Walk’ we took a big step in adding live drums and guitar amplifiers. It was a stylistic departure but it had actually been the plan for years, we were just waiting for the right time to execute. The next logical step with ‘Shame’ was to hand off the Mix phase of production. An alternate set of ears in the Mastering phase is crucial to gaining a wider perspective and creating a powerful end result, I wanted to find a similar constructive collaboration but earlier in the process. Randall was the obvious choice, he has long been a teacher and mentor to me; Berdan, Sharp, and I have some all-time favorite records bearing his name. Randall and I have also worked in the control room together many times before – the Mandy OST, and co-Producing the recent Algiers LP ‘There Is No Year’ for example – so we already had an established workflow and shared aesthetics.”

The opener “Delco” fuses guttural distortion to haunting chants buttressed by muscular percussion. Short for “Delaware County,” the track reflects on Berdan’s upbringing in a suburb west of Philadelphia and “how beatings and bullying by these local hellraisers taught (him) how to keep his guard up and navigate a violent world.” Elsewhere, the jagged thrashing of “Dispatches” nods to “Alan Moore’s Batman: The Killing Joke and how thin the margin between personal stability and total collapse is.” Neck-snapping riffs kick “Life in Remission” into high gear as a spiteful scream spirals towards oblivion.

“The song is about people I’ve been close to who passed away and how I’ve become numb to death. A lot of these songs have to  do with an internal dialogue and overwhelming sense of fear, uselessness, and dread constantly whispering at me, ‘You’re not good enough. Give up and join those you’ve seen disappear and die.’”

The near eight-minute “I Am The Cancer” closes the record, as Berdan adopts the perspective of “The Judge” from Cormac McCarthy’s Blood Meridien, going so far as to crib his proclamation, “God is war; war endures”. In many ways, the title track “Shame” cements the core of the album with unhinged instrumentation and a brutal bark.

“It’s about self-medication not working anymore,” he admits. “This person is so tortured by internal ghosts from the past. He winds up pouring alcohol on his grief and guilt until he’s drowning. It was partially inspired by a Twilight Zone episode called Night of the Meek about a drunk, helpless department store Santa Claus who wants to make a difference, but feels incapable of doing so. That story has a happy ending. We’ll see about this one.”

It may not be pretty, but Uniform’s story is most definitely real. “All I can say is, I’m glad this exists,” Berdan leaves off. “It felt like something we needed to create. Just completing it is enough for me.”